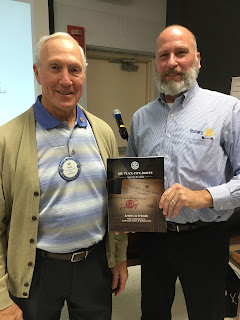 The Peace Pipe Letters was a project started by the Keokuk Rotary Club after then president, Jewett Futton Jr, and his wife traveled to the International Rotary Convention in Austria.  Jewett was president of the Keokuk Rotary Club in 1930-1931.  The year after (1931-1932) the Rotary theme was “World Peace and International Understanding”.  Jewett took this theme to heart.   After spending time in Austria for the International Convention and traveling Europe for several weeks after, Jewett came up with the idea of sending letters of goodwill to Rotary clubs around the world.  With the history of Chief Keokuk (the namesake for Keokuk, IA) inviting those to participate in the symbolic gesture of sharing a peace pipe, Jewett came up with the idea of the Peace Pipe Letters.   With these letters he was hoping to extend the invitation for friendship and sharing of goodwill to all Rotarians around the World. 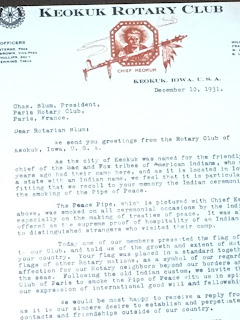 December 3rd, 1931 the first of over 500 letters went out to Rotary clubs everywhere.  On December 11th, they received their first reply back from Mexico and with many more letters to follow.  Anthony told us there was a 40% reply rate with responses from all over the world, with many letters requiring translation.
Anthony has compiled all these letters into a wonderful book and has asked Rotary Clubs around the World to again remember this wonderful initiative started by Jewett Futton Jr.
What a great reminder of the strong connections Rotary has all around the World!