Thanks to Jim Gorham for inviting Jim Goff to speak on December 11th about his new service dog and how it has brought him new freedoms, speed, and mobility. Goff has a degenerative disease that has made him legally blind in recent years.

Rotarians know how to ring in the Christmas spirit. Look at those sweaters! 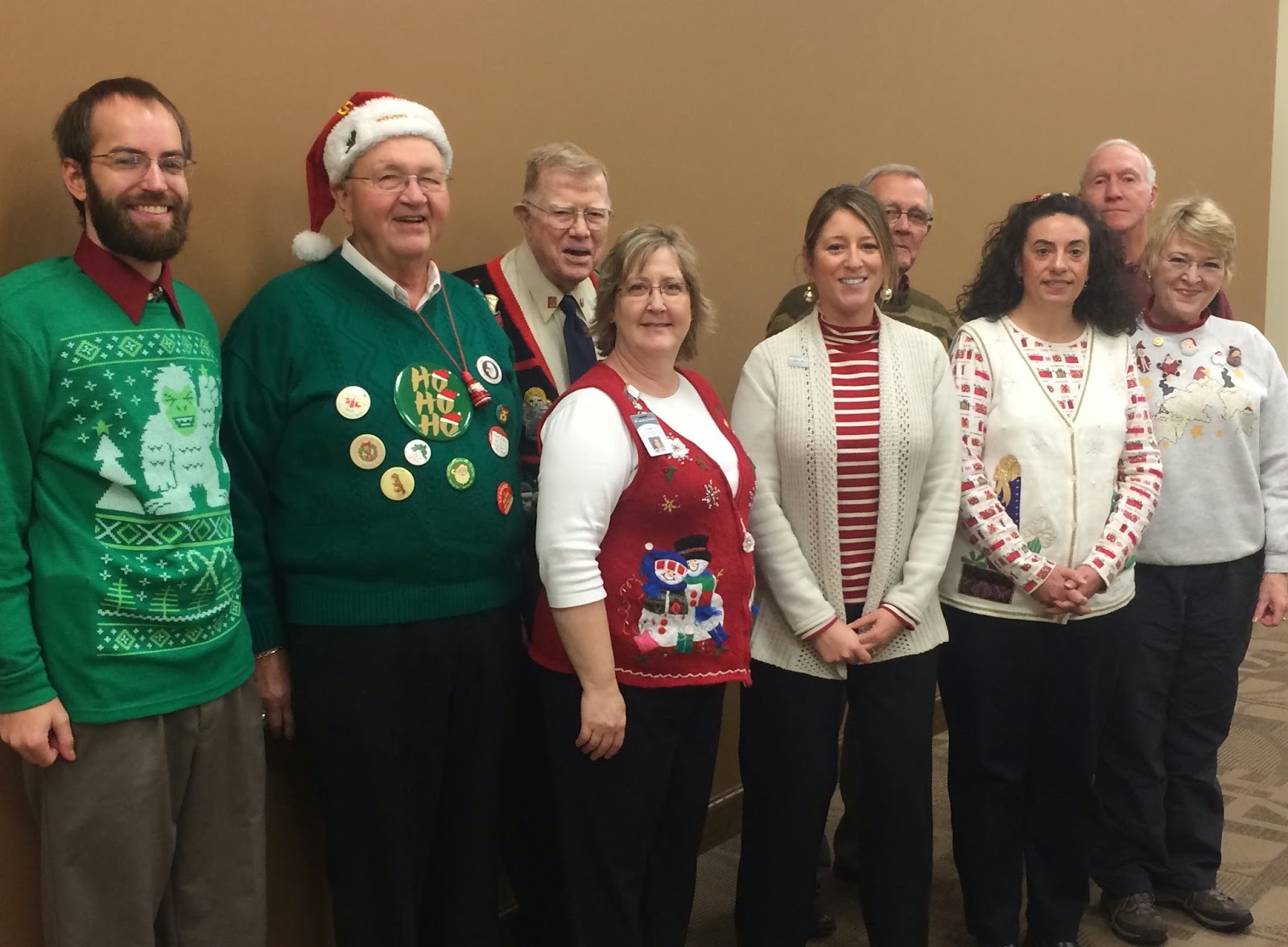 Our program on December 18th was a lovely piano duet concert at the Washington Public Library Thanks to Shelley Lawson and her friend. 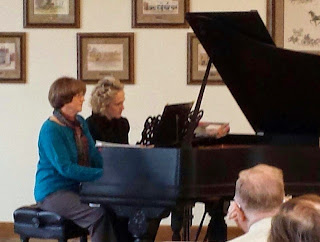 Thanks to Bob Freeman for his personal story about why he Relays in Relay for Life. It was touching to hear about the fight against cancer that friends and family waged along side his step-daughter Sandy. 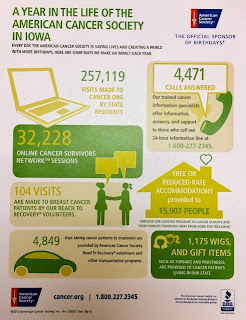 Thanks to all the Rotarians that helped to bell ring at Hy-Vee on Sunday, December 7 for the Salvation Army. Your friendly smile helped to put people in the giving spirit!

November was a great month for Washington Rotary. Not many updates due to the editor's home improvement project that sucked up a lot of spare time on the weekends.

Hey, there is an opportunity for a Rotarian to step up to get in line to be a future District Governor for District 6000! Just stand up, or sit down, or just hold still to volunteer. Don Patterson was DG and he lived.

DON'T FORGET that Rotary will be at the Washington Fire Station at 215 E. Washington St. this Thursday, October 30! Don't be late. Be a little early if you can and grab a box lunch.

Rotarian John Thorne told the club about his experience of getting polio in the summer of 1952 in 4th grade. He spent a few weeks in the Fort Dodge hospital with a mild case, just flu-like symptoms. There was a whole ward of polio kids, including one in an iron lung. He remembered being quarantined essentially, and visitors (like his parents) had to wear protective clothing and talk through the door.

John said the spinal tap was one of the more unpleasant tests they made him suffer through.

He was lucky. He got better and got to go home and hasn't suffered any particular ill effects since then. He got a PhD and learned to play the piano.

Millie Youngquist was 2 years old when she contracted Polio in 1954. Her parents thought something was wrong when she had trouble walking. They took her to the University of Iowa clinic where they helped her with some gentle exercises (she was 2...) and massage.

Millie had a light case (like John Thorne) and within 6 weeks she was walking again. One result she has is that her right calf is smaller than her left, and her right leg is a little shorter than her left. Like Thorne, Millie also plays the piano.

Terry Engelken reminded the club that Rotary International has been an instrumental player in helping to get the world 99%+ close to eradicating polio. Check the #ThisClose PSAs.

Polio survivors number 10-20 million, and are one of the biggest survivors group in the US. Post-Polio syndrome is a big factor for many of these people, when up to 35 years later, new polio-like symptoms arise and can be debilitating.

Polio cases dropped dramatically in 1962 in the US with the introduction of the Sabin vaccine.

October 24th was #WorldPolioDay. Click here to read how Rotary is leading the End Polio Now charge. Lots of good stuff that will make you proud to be a Rotarian.

It is convenient that the weather was beautiful so that Cafe Dodici could just walk our lunch over from the restaurant. 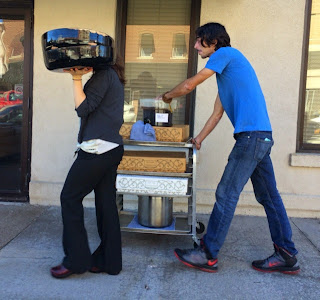 Lots of guests on Business & Industry Appreciation Day makes this lunch meeting very special. Thanks to all the guests and thanks to the Rotarians that brought a guest to share our day with.


Eric Hahn, the General Manager at Bazooka Farmstar, gave a very informative presentation about how Bazooka is creating new products and growing their business. They have grown from about 25 employees three years ago to about 80 today.

Jim Gorham brought John Greener to Rotary. John is a retired teacher and happens to be running for Iowa House District #78. Welcome John!

Thanks to Phil Rabinowitz for inviting Susan Mitchell and Jeri Crile from the Washington County Department of Public Health to talk about the Elderly Waiver program.

Elderly Waiver is a Medicaid program which pays for a variety of services to keep persons 65 years of age or older in their homes longer and safer.
In order to qualify for the Elderly Waiver, you must meet these thresholds:
When a person meets all of the above qualifications, they may qualify for Elderly Waiver.  A Case Manager will assist the individual with the application process.  If they are approved for waiver, the Case Manager will coordinate and manage services to help them safely maintain their independence in their home.

There are about 80 individuals in Washington County receiving benefits through the Elderly Waiver program.

Feeling left out of the hipster Rotarian crowd? Jump in to social superstardom by ordering a new Rotary shirt. Made of wicking material to keep you cool and dry when working hard on community service projects or just pointing at your employees.

Don't forget to bring a guest on Thursday, October 16 for Business & Industry Appreciation Day. Eric Hahn from Bazooka Farmstar will be the guest speaker. Bazooka has a lot going on, so you won't want to miss this.

The Chamber has hosted the Candlelight Tour of Homes for many years as a way to raise money to pay for the maintenance of the Christmas lights on buildings around the Square. This fall, several homeowners backed out of participating. Now the Chamber will have to cancel the event this year (and not have the funds to do the annual maintenance on the lights) UNLESS 2-3 valiant heroes stand up to volunteer their homes to appear on the Tour of Homes the first weekend in December.

Don't let Christmas be canceled! Volunteer by Friday afternoon. Call Dani or Michelle at the Chamber, 6533-3272. Its a fun time!

Don't forget to invite a friend to attend our annual Business & Industry Appreciation Day lunch on October 16. The guest speaker will be Eric Hahn, general manager at Bazooka Farmstar in Washington. He has helped to guide the company's recent growth from about 25 to over 80 employees in the past 3 years, and to expand its product lines.

Recently, Bazooka Farmstar was recognized as the 9th fastest growing company in the Creative Corridor.

If you need a few ideas of who to invite (especially potential future Rotarians) to this interesting presentation, contact Ed Raber.

It was a educational Club Forum on Thursday. We started with impersonations.

Club President, Susan Wellington talked about keeping the good momentum going for the rest of the year. Terry Engelken spoke about the Club's success in donating to DG John Ockenfels Operation Warm - Coats for Kids initiative. We are hoping to increase our Club's donation in order to purchase 80 coats for area needy kids.


Thanks to Jim Mostek, 2014 Rotarian of the Year (ROTY), for giving the financial report for the first quarter, unfettered by the constraints of Generally Accepted Accounting Principals.