Thanks, Eric Turner for having Dave Mitchell come give us an update on the Wellness Park project.

Dave said that WEDG Board Directors heard about the Wellness Park project several years ago and felt that it was an important community and economic development initiative. 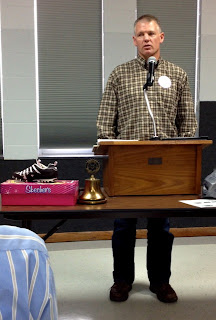 Dave said that a project steering committee of community volunteers has been working with landscape architect, Steve Ford through his Iowa City firm Confluence and partnering with Shoemaker and Haaland to do some planning.

Dave said that they have come up with a phased approach to developing the City's property north of West 5th St. 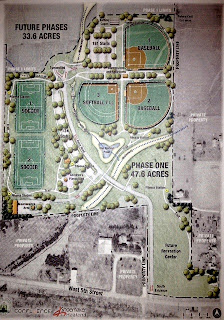 It was also great to have John Moenck's smiling face back at Rotary this week. Welcome back, John! 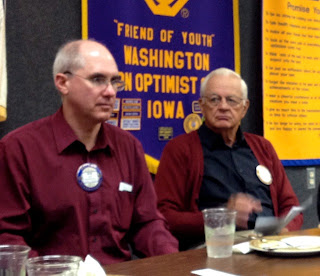 There was a great crowd of around 400+ at the Washington Community Center on Thursday night for Ballet Forklorico's performance. It was a great show, and many Rotarians and their families attended. During the day, they performed at Washington Middle School as well.

The District 6000 Conference was this weekend at Honey Creek Resort. The shoe donations poured in and they arranged them in the front of the lodge. It was impressive.

The conference is a fun time to meet people from around Southern Iowa, as well as from around the World. We got great updates on RYLA, MOST, a performance from Ballet Forklorico, presentations by the foreign exchange students, foreign Rotary Friendship Exchange professionals from Chile, and other good stuff. 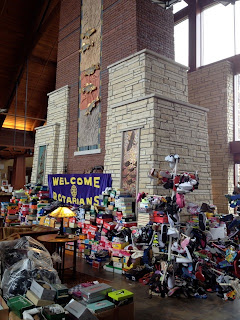 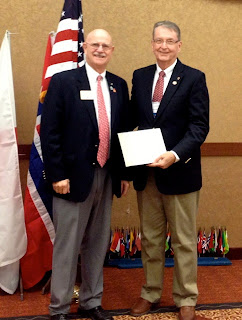 Jacque Andrew of Ames is our next District Governor, which among other things, means that the next District Conference in April 2014 will be in Ames.

We'll have Rotary this week, but I can't put my finger on the upcoming schedule. I think later this month is a Club Forum you won't want to miss, and Moenck has the program on May 2nd. Make time for Rotary!

Above & Beyond - Million Dollar Marathon

Don't forget that Thursday evening is a free (or free-will donation) performance by Ballet Forklorico at the Washington Community Theater. The group is performing in several nearby communities this week, mostly sponsored by fellow Rotary clubs. They will also perform on April 12th at the District 6000 Rotary conference at Honey Creek resort. Click here for more information.

Bring your family and friends out to the show on Thursday evening!

Will you finally remember to bring some shoes for Rotary on Thursday?

Remember that District 6000 Governor Terry Geiger is encouraging all Rotarians to donate a good pair of shoes for the District Conference.

Coast to Coast For Cancer

Angela gave a moving account of her struggle against cancer and how Washington County's Relay For Life gave her the strength to fight back. She is training for Above & Beyond's Million Dollar Marathon which is organizing a string of team marathons across the country to raise money for cancer research.

You can follow Angela's blog about fighting cancer and training for her marathon on the Coast to Coast For Cancer web site. Its pretty neat.