Last week we had a really special guest for our weekly Rotary meeting!  Jim Gorham arranged for Ambassador Kenneth M Quinn to join us for lunch and to speak to our group about his time with the World Food Prize!
Ambassador Quinn assumed presidency of the World Food Prize Foundation in 2000.  The past 20 years he has been working to make the World Food Prize the "Nobel Prize for Food and Agriculture" and has traveled all over the world.  Ambassador Kenneth has Iowa roots, and hails from Dubuque; attending Dubuque Whalart for High School and Loras Collage for his undergraduate.  He shared how he moved from his first job in Dubuque to 10 years later being employed in Washington DC at the White House!
Dr. Norman E. Borlaug developed a"miracle"wheat in Mexico through the 1940s and 1950s.  This new wheat was developed and able to grow in a variety of different growing conditions and changed agriculture in Mexico and later in Asia and all of Latin America.  In 1970, Dr. Borlaug received the Nobel Peace Prize for his lifetime work and his achievements in agriculture. The World Food Prize was founded by Dr. Norman Borlaug in 1986.
The World Food Prize has had 2 dreams in the past 20 years with Ambassador Quinn as president;
1. Make the World Food Prize the "Nobel Prize for Food and Agriculture"
2. Make Central Iowa the Food and Agriculture Capital of America
The World Food Prize holds an annual symposium in October in Des Moines where international leaders, farmers and experts come together to discuss global food security and nutrition. 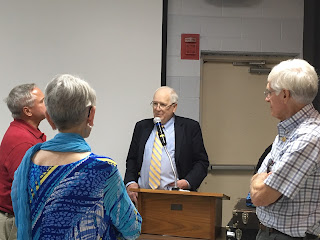 Thank you Ambassador Quinn for attending our weekly meeting and presenting all this wonderful information on the World Food Prize! 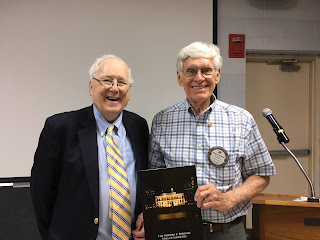