Thanks to Curt Mayer, Principal at the Washington Middle School for giving a great presentation on Nov. 1st on updates this summer to the 1918 school building and its transformation into a grade 6-8 Middle School. He also had good information on new academic programs and initiatives at the Middle School. 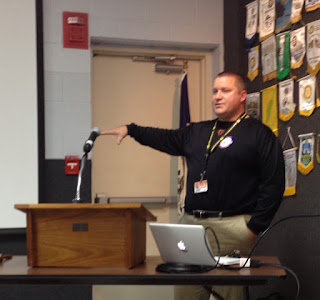 Our program from Business & Industry Appreciation Day was Jon Thompson and Todd Thompson (and their partners) talking about their innovative Reliant Long Term Care Pharmacy, and their ground-breaking Tele-pharmacy business they were about to open in Victor, Iowa at a pharmacy that they owned. (Jon Thompson also owns Bean's Pharmacy in Washington.)

On Friday, they had their Grand Opening, and Governor Terry Branstad and Lt. Gov. Kim Reynolds were the special guests. The HLV 4th and 5th grade classes attended, along with about 80 area community people, the IMS economics class, many family members, and Washington Rotarians Terry Engelken, Craig Davis, and Ed Raber.

The innovative software to make this business possible was written by Roby Miller, co-founder of TelePharmTechnologies (along with Jon and Todd Thompson), and graduate of IMS, University of Iowa, and Stanford University.

This was a neat and historic event to attend, and Victor, Iowa was very excited about keeping their local drug store open. This could be a big deal business in Washington, Iowa.

Xicotepec Project Application DUE THIS WEEK!

The Rotary District 6000 Xicotepec Project application form for the March 2013 project team trip to Xicotepec is now available online. The deadline to submit your application and the initial $200 deposit is Nov 9, 2012. You know you want to do this.

Trip dates are March 16 – 24, 2013.  2013 will be the 11th consecutive year in which a project team from our district has traveled to Xicotepec to support the projects of the Rotary Club of Xicotepec de Juárez.


All the information needed in order to apply will be found at the online site, which is: http://sites.google.com/site/xicoproj/