Thanks to Katy Wellington and Holly Vittetoe from Washington High School talking about the upcoming Dance Marathon this Saturday at the High School. They still have some tickets to their dinner Saturday. The proceeds from the Dance Marathon go toward emotional and financial support of pediatric cancer patients the University of Iowa.

Last year, Washington High School came in third in Iowa for raising about $6,600 through their Dance Marathon. Maquoketa High School won with $9,000 which is Washington's goal for this year!  Thanks to everyone for making a contribution!

It was great to have some time at the end for Brent Hinson to give us an update on whats going on with the City of Washington. 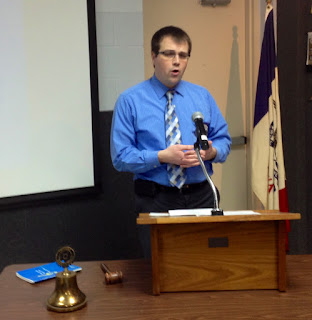 Brent gave an update on several priorities and initiatives, including:

Cheryl Kurtz told the club that they'd be pulling some new tunes and old favorites together for a new song book.

Make sure that songs you love to sing like "The Happy Wanderer" make it in to the new song book by calling Cheryl every week. Check out the Muppets version here! For that matter, here is the Muppets doing Bohemian Rapsody, which would only work on club meetings where the program doesn't show up because its so long, but that would be awesome.